Mego Johnny Canuck and Others

The "Mego" Johnny Canuck 12-inch action figure of the 1960's was a near identical twin to his brother, the original Fighting Yank action figure that was sold in U.S. retail stores. At the time of their initial release (circa 1965), both the Johnny Canuck and the first-issue Fighting Yank were in for rocky times ahead, as a subsequent law suit instigated by Hasbro for infringement on the design of GI Joe by these "knock-off" figures was about to be launched. Thus, the Johnny Canuck figure lived a rather short life span in his original fully articulated body. At the time, boxes were not marked Mego as the "Mego Corp." standardized name was not used extensively until the late sixties and early seventies. These figures were sold by "Princess Grace Doll, Inc." This company was either the parent, or a subsidiary, of Mego (also known at the time as "Mintex," an acronym standing for Mego Industrial Textiles). 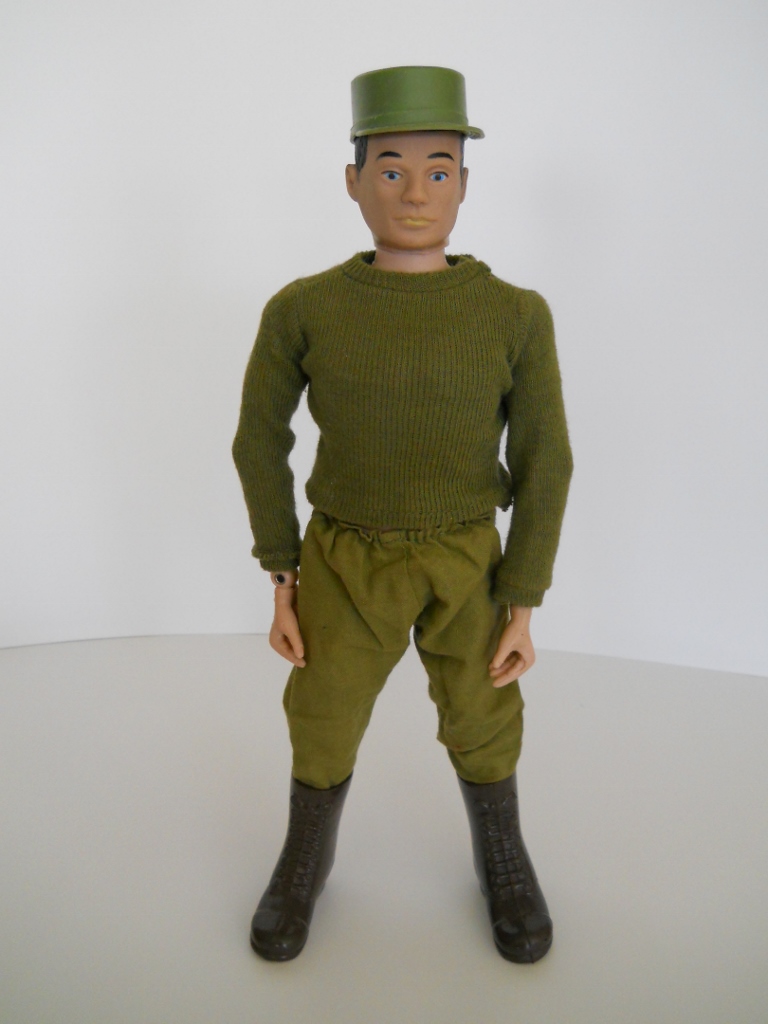 The clothing shown above was identical to the American "Fighting Yank" figure, save for one difference. The front of the green knit sweater was not stamped with the words "Fighting Yank" in black ink on it.

I was previously under the impression that there was no metal dog tag and chain included with the figure, but I have recently received compelling evidence, from a knowledgeable collector, that Johnny Canuck came with a silver metal "Fighting Man" dog tag, similar in appearance to the U.S. "Fighting Yank" dog tag in terms of design and composition, with the only difference being the second word (Man vs. Yank) on the tag. I don't have a "Fighting Man" dog tag in my own collection, so I am stating this based solely on photo evidence sent to me of other Johnny Canuck figures wearing the tags.

The photos below reveal some more detail of the pants and boots. Note that the brown boots on these action figures were not stamped or marked "Hong Kong," as was the case with many other similar boots of this era. True Johnny Canuck boots were "blank" on the sides. Similar boots, marked Hong Kong, were produced by several of the other "knock-off" companies at the time, such as RedBox or Leslo, to name at least two. 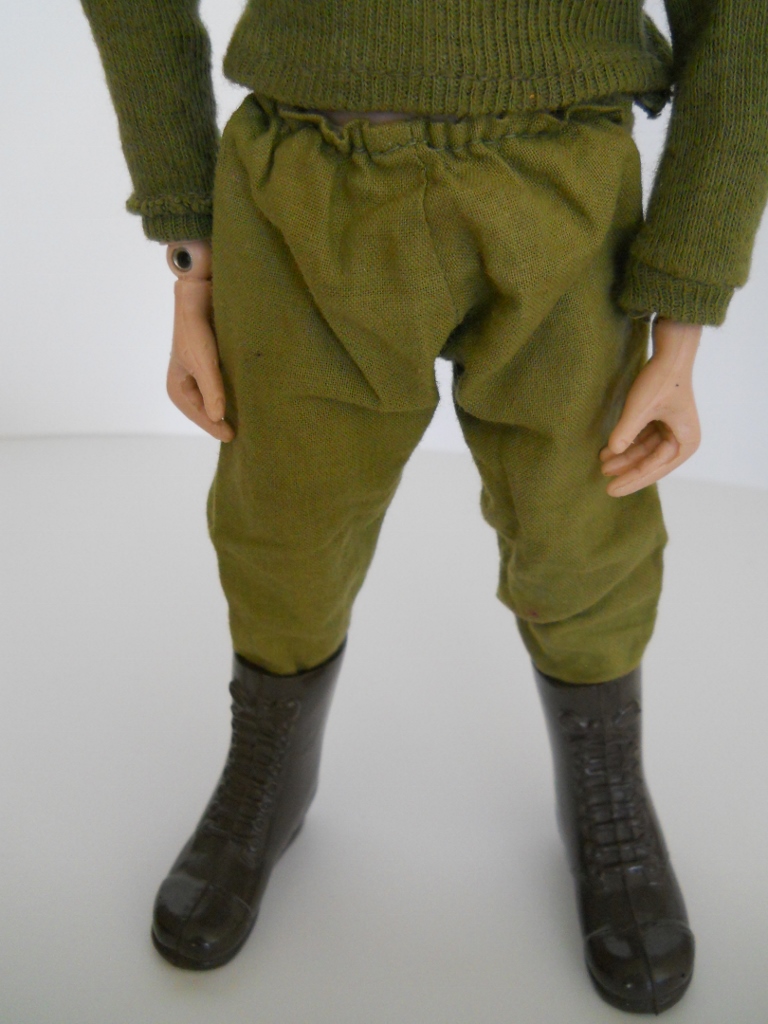 Note the elasticized waist of the pants. Neither the pants nor the sweater were labelled or marked with any identification as to the maker. All clothing items were, however, made in Hong Kong factories.

The following two photos show close-ups of the Canadian Johnny Canuck's face and hair. Note the grooves in the back of the head that simulate the texture of a real head of hair. Johnny's relatively "flat" head of hair was different from the head of hair on a Fighting Yank figure, and Johnny's face lacks the prominent raised "smirk" dimples around his mouth that the U.S. figure displayed. 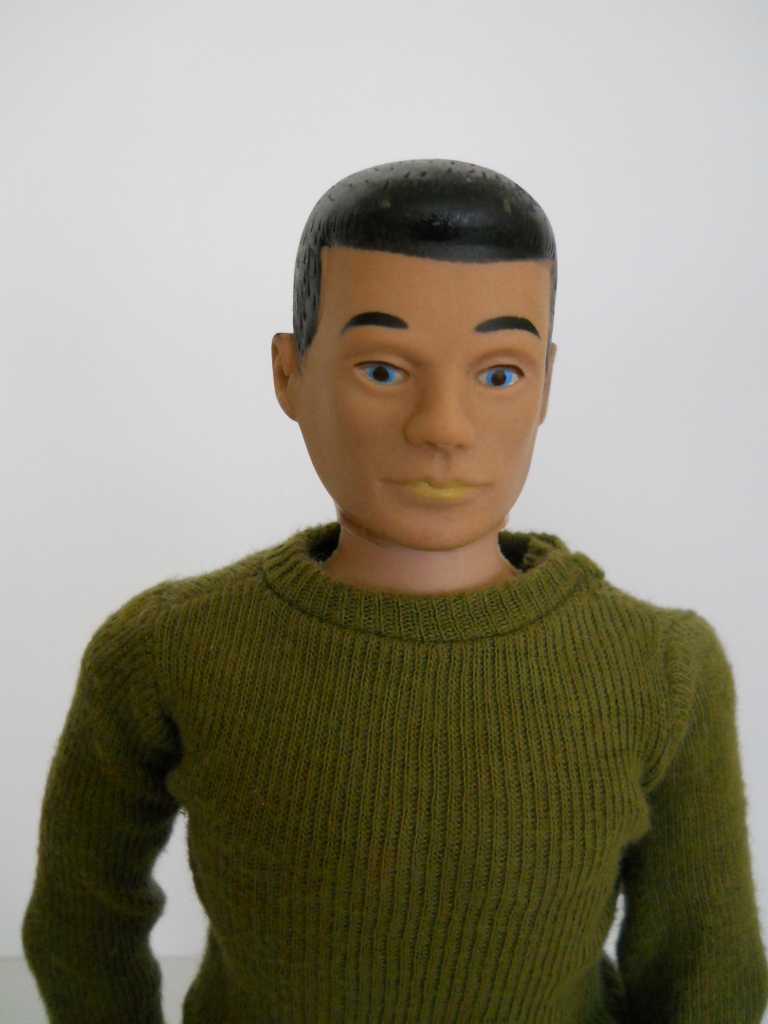 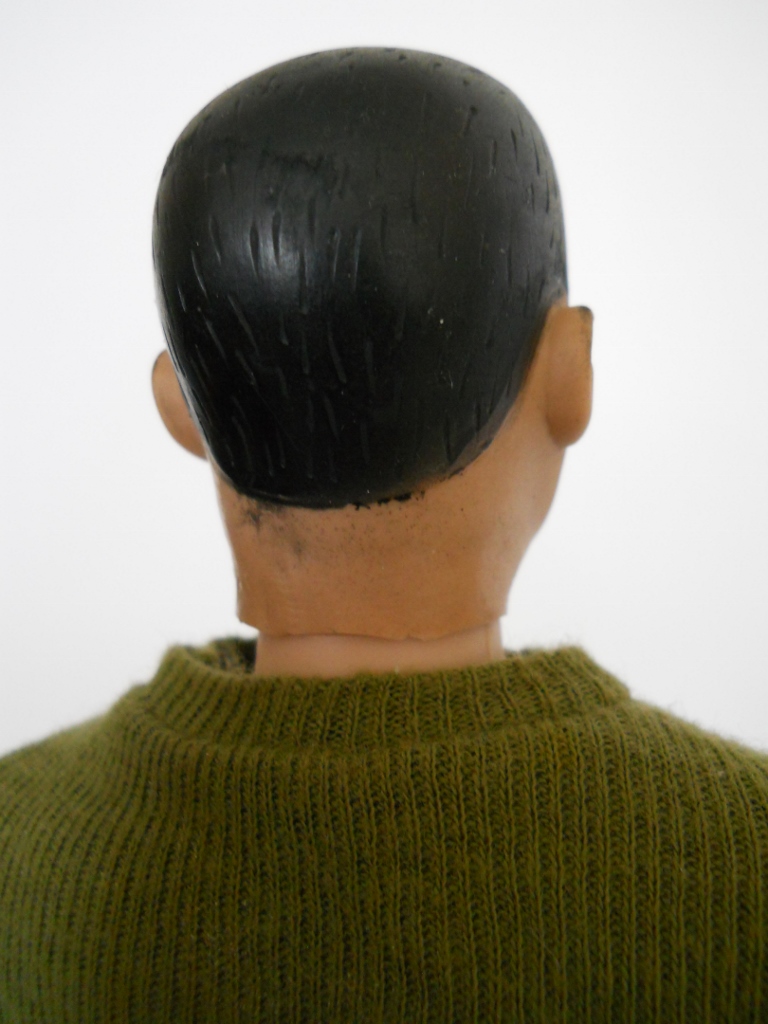 The following comparison photo displays the difference between a Johnny Canuck face (on the left) and a Fighting Yank face (on the right). 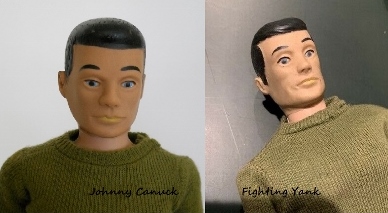 The back of the figure's neck also did not contain any manufacturer markings such as found on Mattel or other doll heads. The only markings on this figure were molded into the middle of his back. They simply read "Made in, Hong Kong, No 2012" as the photo below attests.

The retail boxes were also a close relative of the American Fighting Yank boxes, having the same image of a combat soldier on the front, but lacking the words "Fighting Yank" in large red lettering above the picture of the soldier. These boxes simply read "Johnny Canuck; Canada's Fighting Soldier; Fully Jointed; Move into 1001 Positions" in small black lettering at the base of the front of the box. 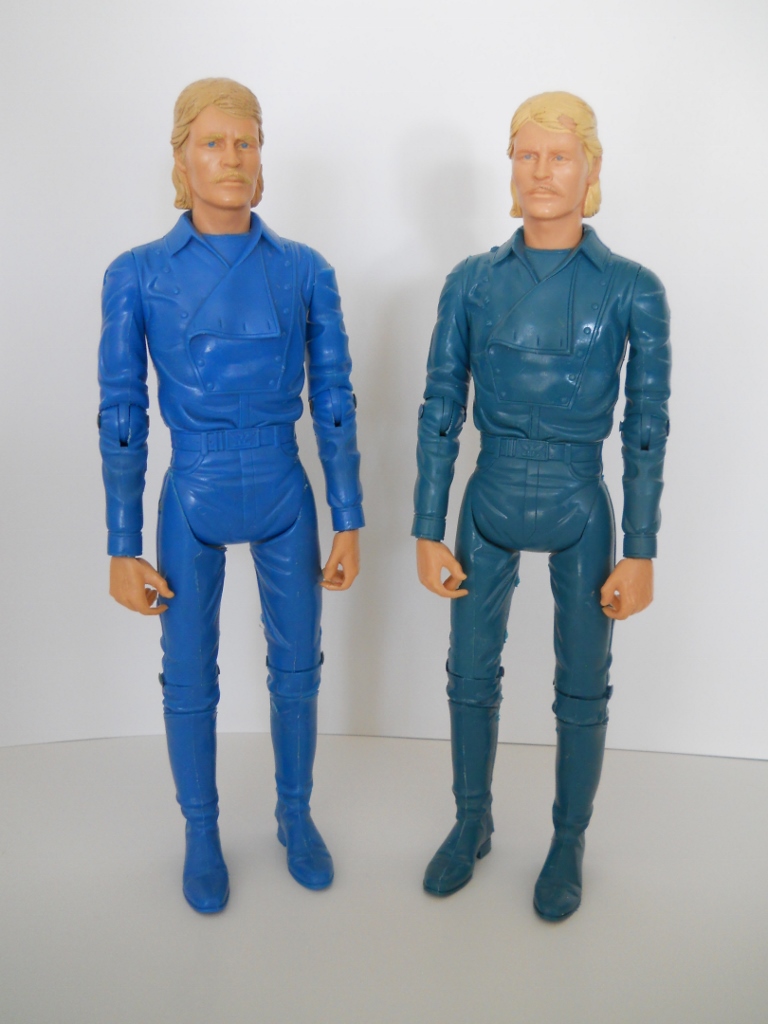 While we are not aware of whom it was that first coined the Canadian action figure as the "Steel Blue" version, we question whether or not it wouldn't have been much simpler to refer to his body color as just being the same as that of both Captain Maddox and Zeb Zachary. The photo below illustrates the Canadian Steel-Blue Custer in the center, flanked by a Captain Maddox and a U.S.-made Zeb Zachary. All three body colors are absolutely identical; so why do we not call the typical Maddox or Zachary "Steel Blue?" 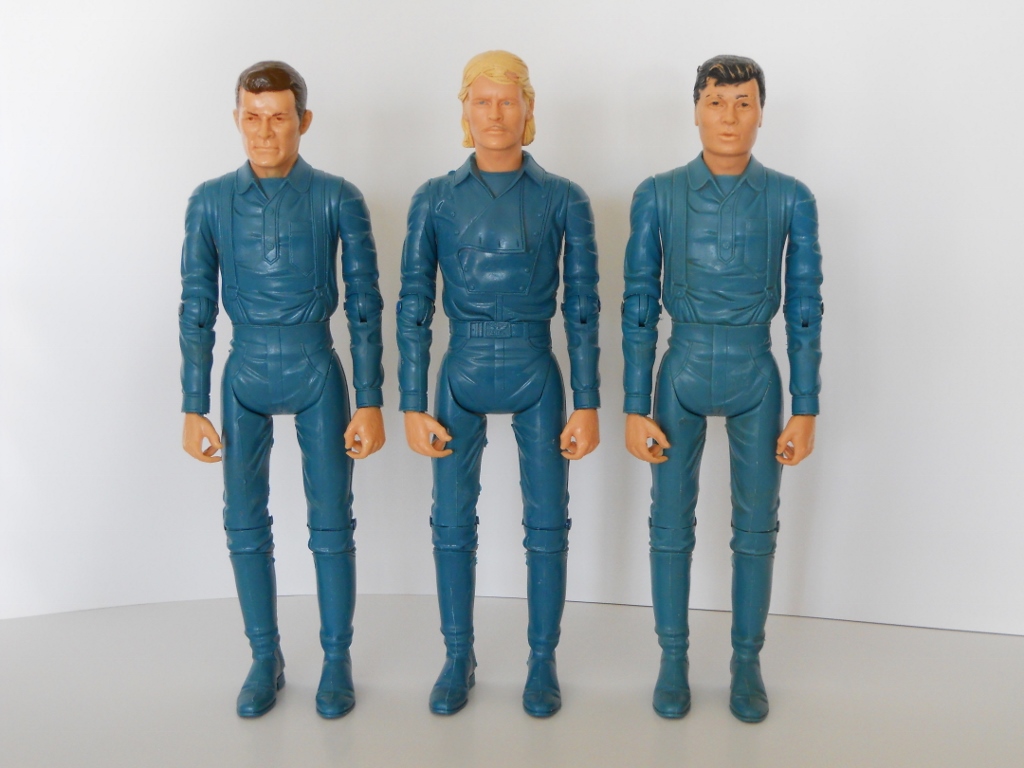 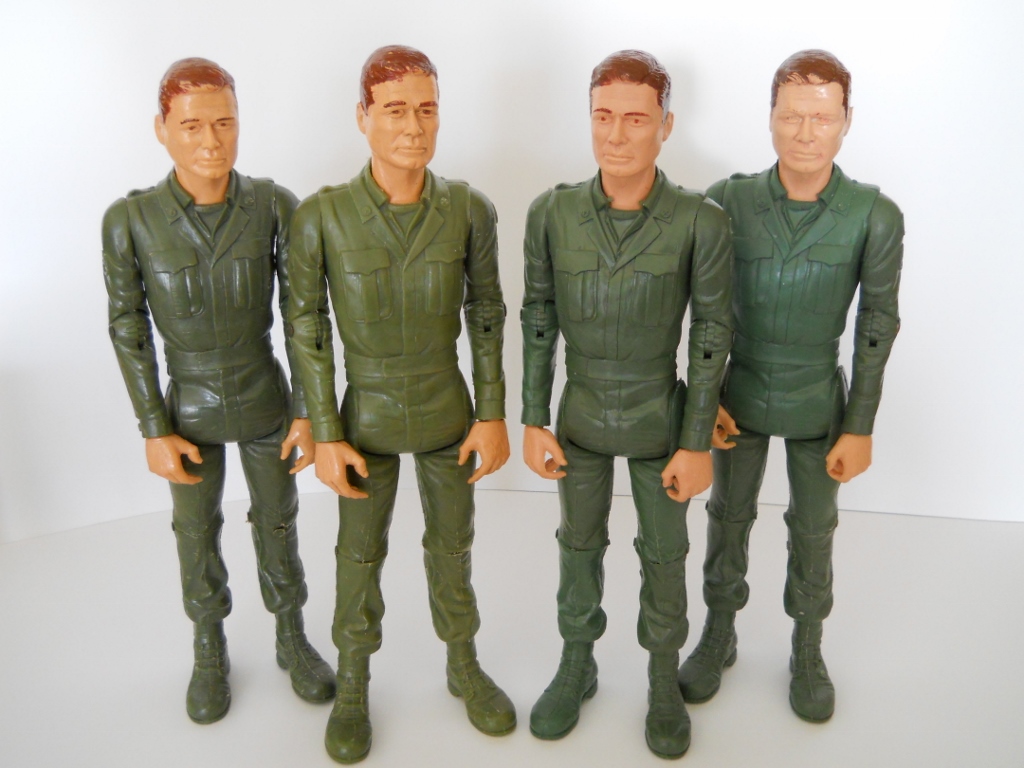 As evidenced in the above picture, the color of the Stony Smith body could vary from production batch to production batch, and there was absolutely no consistency when it came to the shade of green that would ultimately result. In general terms, the Canadian body is usually a more "leafy green" shade than those of U.S. figures.

Furthermore, the Canadian Bend-Leg Stony figures often had differences in the color tone of their various individual body parts, too. For example, the picture above reveals that one of the Canadian figure's arms are a very different shade from his torso. It isn't uncommon to find figures whose upper legs and lower legs (or upper arms and lower arms) are strikingly different in color. There was no consistency in exactly matching the color of the individual limbs and, thus, some of the Canadian figures can look a bit like a "patchwork" quilt. This doesn't imply that body parts were later switched; this was exactly how the figures were originally assembled at the factory.

The Marx "All American Fighters" Series

Although not a series of "Canadian made" action figures, we could not very well discuss both the American and Canadian Stony Smith figures, along with the Marx Canadian "Buddy" figure and the Marx General Eisenhower figure (in the previous "Action Figure" article), without briefly touching upon the U.S. manufactured Marx "All American Fighter" line-up. The photo below shows five of our All American Fighters: 2 Marines, 1 Soldier, 1 Sailor and 1 Airman. 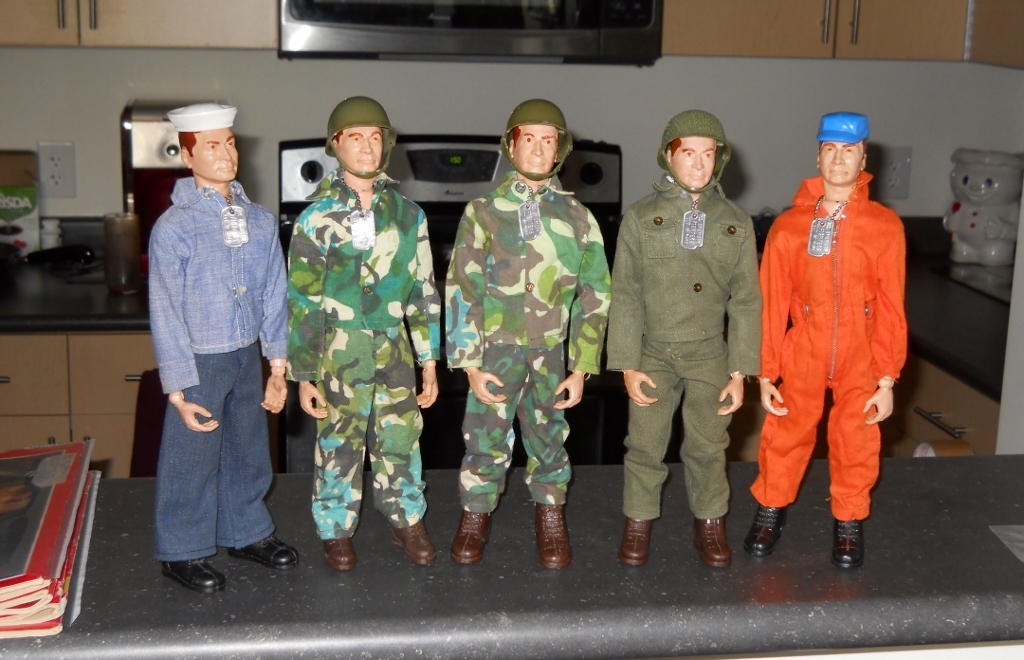 Note that all of the clothing shown in the above photo is authentic, vintage "Marx-made," with the exception of only the boots and the seaman's white cap (which is a non-Marx, non-Hasbro, vintage knock-off cap). The true sailor's gob cap has a Marx logo imprinted on the underside of it (which the one pictured does not).

The boots worn by the five Fighters pictured above are either Hasbro "wide" low-top boots or Canadian-issued Hasbro Canada "narrow" low top boots. True vintage Marx All American Fighter boots have become very fragile with the passage of time and most have crumbled into pieces after having been handled. Having said this, we can confirm that it is mainly the "brown" All American Fighter boots that have become the most unstable. They tend to shatter into dozens of small flakes when touched. Their consistency and thickness is no better than thin sheet of frozen chocolate (the broken sections actually look like chocolate bar flakes). The "black" All American Fighter boots have held up a bit better over the years, and, I have owned pairs that were still 100% intact and did not crumble at the slightest touch. There must have been some component in the chemical formula for the brown boots that caused this instability, and that same element was likely not present in the black boots.

Both the original "brown" and "black" Marx All American Fighter boots are of a "medium" height when compared to Hasbro GI Joe boots. The Marx boots are slightly taller than a Hasbro low-top boot, but they are also noticeably lower in height than a Hasbro high-top boot.

A Brief Tribute to Mattel's "Barbie"

While one could argue that an article on Mattel's Barbie "doll" has no place in a section dedicated to "action figures," we would beg to differ. If it wasn't for the iconic 11 1/2 inch fashion doll, in all likelihood, there never would have been a Hasbro GI Joe. If there was no Hasbro GI Joe, the phrase "action figure" may never have been coined. If there were no action figures for boys, there would also never have been a Marx Johnny West, nor an Ideal Captain Action, created, and so on and so on.

Thus, in one sense, if Barbie never would have first appeared in 1959, the entire line-up of 12-inch action figures for boys that sprouted up commencing in 1964 may never have happened. The photo below shows four mid-1960's era "bubblecut" Barbies.

The photo below shows three other sought-after "Canadian" Marx action figures. Each one was an addition to the "Johnny West cowboy" western action figure series. Can you identify them? 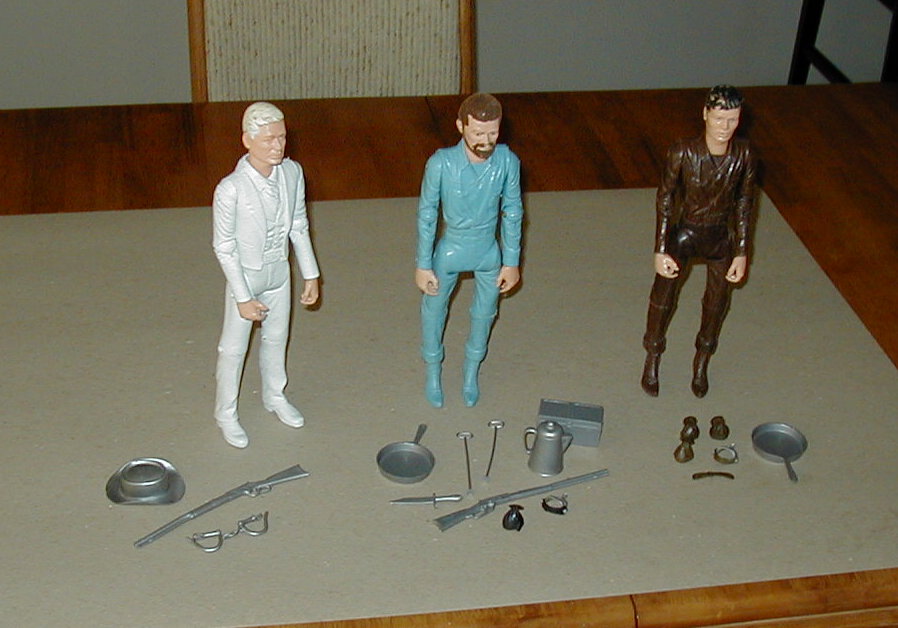 IMPORTANT NOTE: It is evident that much confusion still exists with Marx Johnny West Series collectors regarding the release dates of these three Canadian-made Marx action figures. Please go to the "Canadian Christmas Catalogues" tab for more detailed information as to when these figures first appeared within the Simpsons-Sears Christmas catalogue pages. The Sears catalogue pages confirm that Marx Canada released one of each of these action figures every year for three consecutive years. The correct Canadian release dates of these figures were:

1971 - Jimmy West (the 1971 Sears Canada Christmas catalogue indicates that he is a "new" addition),

Note that none of these three Canadian figures were released in the 1960s, as some web sites and guide books will lead you to believe.